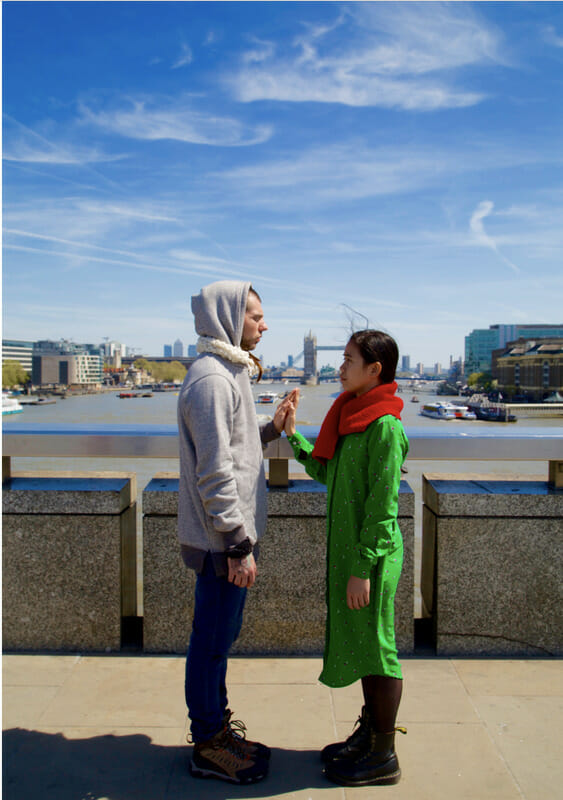 Rhine Bernardino has stamina. Her most recent ‘durational’ art performance involved her sitting down, sewing a continuous thread of toilet paper using her own hair whilst listening to the Philippine National Anthem – for eight hours straight.

Rhine is a Filipino artist, curator and researcher currently based in London. She was the first Filipino artist to receive an MA in fine art, sculpture at the Royal College of Art (RCA), and has since curated and exhibited her artwork internationally, especially within Europe and Asia.

Rhine uses her art to create conversations around issues like the “invisibility” of many Filipinos in UK society. Although she always carries her identity with her, she believes that a lack of Filipino artists has led to difficulties.

“It’s just there and a part of me,” she says. “If anything, I’ve definitely felt very isolated. I’ve experienced a lot of racism: like microaggressions, subtle racism and sexism.”

Where I’m Coming From

Rhine’s recent eight hour performance – ‘To Suffer and Die for Theemonyo’ – was part of the online exhibit, ‘Where I’m Coming From’ (#WICF). Rhine co-curated the event with Linda Rocco, as part of their organisation _inventory platform. The project aimed to open up conversations on the exclusivity of language in accessing arts and culture.

‘Where I’m Coming From’ involved four different languages and cultures that are found in active but “highly invisible” migrant communities in the UK: Filipino, Taiwanese, Yoruba and Berber. It featured three Filipino artists: Lilibeth Cuenca Rasmussen, Vanessa Scully and Rhine Bernardino herself.

Rhine explains that including Filipino culture was important to her, because aside from being Filipino herself, she thinks that there is an under-representation of the Filipino diaspora.

“We’re everywhere! Especially in the UK, there’s a big community of Filipinos contributing to not just culture, but its economy. But we don’t seem to be very much present in arts and culture. We’re not really able to break through,” she says.

Rhine says she originally wanted to become a lawyer, became an artist in order to speak up against injustices and “amplify voices in a more marginalised community”.

She started off studying Political Science at university but described it as a lot of reading, writing and theories. She believes that with art there’s “a chance to have a language that is universal”.

“There’s a lot of interesting issues and topics to explore when you work with communities. Not to romanticise it – it’s very difficult as well and I don’t really recommend it for people who don’t have a lot of resilience.”

To Suffer and Die for Theemonyo

Rhine’s ongoing work was first created for her 2017 installation ‘About 7000’ and was inspired by the original number of deaths in Philippines’ ‘war on drugs’. She says that she uses toilet paper to question value and present how both objects and lives are treated as arbitrary.

“No one really gives any importance to it [toilet paper] and then suddenly there’s a pandemic and it’s the most important commodity.”

Another aim of the artwork was to allow the audience to be able to visualise the number of deaths.

“I think it’s really important to give physical representation of these things, so that we could have a connection and we’re able to comprehend it.”

Rhine has continued to develop this art piece as the number of deaths has risen, believing that the original ‘About 7000’ could now actually be ‘About 30,000’. In December 2018, the Philippine’s Commission on Human Rights (CHR) said that the number of drug war deaths could be as high as 27,000.

The Philippine National Anthem played continuously in the background while she sewed. In the event’s guide, the anthem is described as highlighting “the essence of patriotism to the extent of sacrificing one’s life for the country.”

Rhine says that the idea was to question this “obsession” with dying.

Also at the exhibit, artist Lilibeth Cuenca Rasmussen exhibited her 2001 documentary  ‘Seeing Pillar’, which focuses on her time spent with her grandmother in the Manila slums. The film presented three days of interactions and emotions between “two women of conflicting value systems” that were brought together inside the small home.

‘Where I’m Coming From’ was initially created to be an in-person project based in South East London at Guest Projects. Covid-19 meant that the exhibit had to be worked out digitally, which Rhine says they were originally sceptical about.

“It’s only interesting if the mentality and approach that you use is different from how it is in an actual space.”

The move to a digital platform resulted in them having to cut down on artists, figure out the format and timings and understand cross-platform sharing.

“It’s a completely different world: suddenly we’re on social media, we feel like we’re trying to be influencers! But it is quite exciting for us because now it has this reach that we couldn’t have had before.”

Rhine adds that the digital exhibit allowed them to make it more accessible, which they did through easy-read guides and audio descriptions.

Find out more about Rhine and her work on her website.