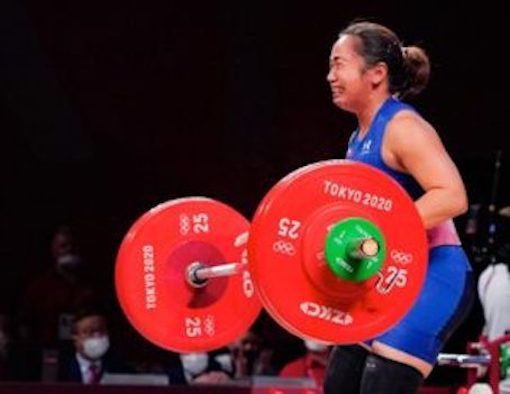 MANILA—Weightlifter Hidilyn Diaz had to breathe in first after her final clean, because it is for all the marbles.

For history. For glory.

Hidilyn Diaz couldn’t hide her hears right after hoisting the golden lift that gave her and her Philippine motherland a first Olympic gold medal.

And when Diaz thrusted the 127 kg. barbell for that final jerk, her arms stood up and her left leg was at its lowest split. Her arms slightly shook. For three seconds, that heavy barbell was still.

On that third second, her face started crying.

Bang! That barbell fell. Diaz clasped her hands into her mouth, crying heavily.

That was the bomb from Southeast Asia that dropped in Tokyo: A monumental upset of an Olympic gold medal victory for the Republic of the Philippines!

Diaz had to heave an Olympic record of a clean and jerk attempt to upset favorite and world record holder Liao Qiuyun of China, 224 to 223 kgs., in the women’s 55 kg. class.

Sporting a black face mask, Diaz couldn’t stop crying until the final note of Lupang Hinirang —her arms in salute to the Philippine flag (for being with the Philippine Air Force). She has been shaking her arms —the arms that made the golden lift— prior to being called “Olympic gold medalist”.

She has fulfilled the dreams of generations of Filipino Olympians and sports fans. She has proven the naysayers wrong.

Triumph of the human spirit

Diaz’s feat was basically a triumph of the human spirit, with practically Liao’s world record lifts  intimidating all competitors. (The Filipina hasn’t even won a world championships gold medal.)

But Diaz and her coach Julius Naranjo (strength and conditioning) told the press Hidilyn “will put on a show” by making lifts that the world “has never seen her do”.

Diaz’s momentum began in the snatch. She tied her personal best of 94 kgs. on her first attempt, then she overturned that with a 97 kg. lift on her second.

Liao surprisingly started the snatch at 92 kgs., then hoisted her heaviest at 97 kg. on the third and final attempt. But Uzbekistan’s Nabieva Muattar led after the snatch with a 98 kg. lift, putting Diaz second and Qiuyun third.

In a battle of nerves, each and every lift in the clean and jerk turned out to be a back-and-forth affair.

Liao started off with a relatively easy 118 kg. jerk to grab the lead with a running 215 kg. total. But Diaz hoisted 119 kg. to jump to the leaderboard at 216 and begin the pressure on Liao.

The Chinese added five kgs. on her next lift and nailed it for a running Olympic record in this new category for the Olympic sport. But Diaz responded by erasing that 123 kg. lift with a 124 kg. second lift (modifying the barbell in what was supposedly a 125 kg. lift).

That second jerk actually saw Diaz move her left and then right foot forward, just to ensure that her 124 kg. attempt is good in the eyes of the judges.

She howled out loud four times after that lift. Diaz started crying, then she embraced her coach.

Liao heaved her heaviest clean and jerk —128 kg.— at the 2019 Asian Championships. But on her final attempt in Tokyo, the Chinese world record holder hoisted 126 kg. to end with a 223 kg. total.

Then all eyes were on that momentous final lift of the competition: Diaz’s.

What a dramatic way to win the nation’s first Olympic gold medal!

Even weightlifting analyst Seb Ostrowicz, founder of Weightlifting House magazine, was “so impressed” with Diaz’s feat.

“She (Diaz) showed us that heart triumphs over strength,” Ostrowicz told The Filipino Connection via Whatsapp after the competition.

“She was in amazing shape, and her team picked her numbers to perfection,” Ostrowicz added, pertaining to Diaz’s clean and jerk attempts at 119, 124 and 127 kgs.

Liao did not miss any single lift; Diaz missed her final snatch attempt at 99 kg.

And the strategy even began as early as Diaz’s training in Malaysia: Naranjo said Diaz had been lifting over-120 kg. in the clean and jerk over there.

“Not only did Hidilyn outlift Liao. The (Filipino) coaches outcoached the Chinese too. A deserving win,” Ostrowicz said.

As for Liao’s third lifts in both the snatch (97 kg.) and the clean and jerk (126 kg.), Ostrowicz thinks those were “too conservative” for the Chinese’s stature (world records in the clean and jerk at 129 kg. and total at 227 kg.).

“Her (Liao’s) third attempts didn’t look too hard. She did everything her coaches asked her to do, making all six lifts. The coaches (of China) didn’t do as well as Hidie’s.”

Diaz’s gold has slayed the ghosts spooking at the Philippines’ 97-year quest for its first Olympic gold medal.

Diaz’s silver in Rio (in the old 53 kg. class), as well as the boxing silver medals of the late Anthony Villanueva (1964 Tokyo Games, featherweight) and of Mansueto “Onyok” Velasco (1996 Atlanta Olympics, light-flyweight) were the country’s highest Olympic feats prior to July 26th, 2021.

Given that all weight categories in the Tokyo Games are new for weightlifting, winning lifts are now the standing Olympic records. Diaz also became the first Filipino weightlifter since Rodrigo “The Mighty Mite” del Rosario to set an Olympic or world record in the Olympic Games.

Featherweight Del Rosario lifted 105 kg. in the press at the 1952 Helsinki Olympics to beat the old 100 kg. Olympic record made at the 1948 London Games.

Her ‘Reason’ for that golden lift

On her fourth and final Olympic Games, this oldest competitor in the 55 kg. class went out in style, will become at least P30 million richer, and has made her Philippine homeland cry heavily with joy.

At the medals ceremony, her index finger pointed to the heavens. She wore a silver necklace bearing the face of the Blessed Virgin Mary.

Diaz’s Sign of the Cross to end her moment at the medals podium helped seal the deal.

That religious moment was the new Olympic champion’s tribute to the Reason why Diaz’s arms went straight up on that golden, final lift.

And to cap it all, Diaz screamed: “Mabuhay ang Pilipinas!” (“Hail, Philippines!”)

(Editor’s note: The author watched the competition via a streaming link. This piece has been reprinted with permission from The Filipino Connection.)