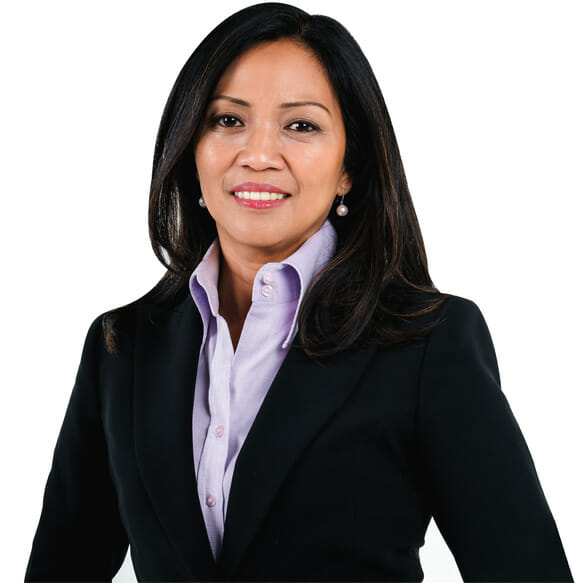 A Filipino has been elected and sworn in as the new Mayor of Hertsmere, local government district and borough in Hertfordshire, England.  Councillor (Cllr) Cynthia Barker is the first Filipino to hold the position following the conclusion of her term as Deputy Mayor last year.  She received the chains of the office on 24 June through a virtual ceremony during the Hertsmere Borough Council’s Annual Meeting.

“So notwithstanding the restrictions of lockdown, I look forward to the year ahead and will do my part in recognising and celebrating all the good works undertaken by the community-minded residents of Hertsmere, which contribute to making Hertsmere such an amazing place to live and work,” she said in her Declaration of Acceptance of Office.

Cllr Barker succeeds Cllr Rabbi Alan Plancey and will serve from 2020-2021.  The appointment of a new Mayor and Deputy Mayor is an important event in the borough’s civil calendar.  Ordinarily, it is held at the civil offices in the presence of community leaders, family, friends, and other important guests.

“I’m fully aware of the importance of the role of Mayor at this time of uncertainty, fear and sadness for so many,” she said. “The Mayor serves as a figurehead for the whole of the Hertsmere community and can really help to bring people together.”

Cllr Barker added, “”I hope to carry on Cllr Plancey’s work by celebrating all the wonderful support provided in our borough, particularly by the voluntary sector, and recognising all the brave and remarkable people who have helped fight coronavirus and are now picking up the pieces as we emerge on the other side.”

During her term as Mayor, she will also be raising funds for a leading charity committed to preventing child abuse and providing support to victims of such.

Cllr Barker was born and raised in San Pablo City, Philippines.  She graduated with a bachelor’s degree in Industrial Engineering at Adamson University before moving to the United Kingdom.  In previous years, Cllr Barker has been recognised for her leadership and contributions among the Filipino-British community.  She has been awarded the British Community Honours Award and has been recognised as one of the Filipina Women’s Network’s 100 Most Influential Women.