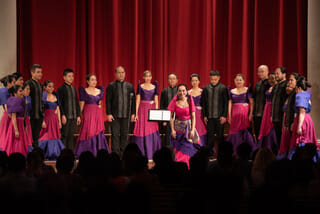 Haraya Choir won the Manchester Amateur Choir Competition in January this year. The members mostly work in the health and care sector across Greater London. In the midst of the lockdown in April, they released a video singing “Heal the World,” bringing comfort to thousands of Filipinos in the UK. Formed in 2016, they have been performing in prestigious venues and events in London, offering their audiences the uniqueness of Philippine musicality.

Get to know them and their work in this Q & A with Haraya Choir Conductor, Karlene Moreno-Hayworth.

When did you form Haraya Choir and what inspired you to form it?

My work is mainly in singing in opera, choruses and religious services. I also do private teaching. Since I have top-level experience in choral music (was part of the batch of Philippine Madrigal Singers that won the European Grand Prix for Choral Music in 2007) in the Philippines, I thought this might be a good opportunity to share what I have learned to our kababayans in the UK.

I noticed that all Pinoy community choirs are solely for religious services. I wanted to form and train a group of singers who sing not only for fun and for the love of music, but also for musical excellence.

We rebranded in 2017 as Haraya Choir. I decided to change the name of the group to a shorter, more catchy and beautiful Filipino word  “Haraya”, which means imagination and vision.

What challenges did you face, if any, at the start of forming the choir?

I guess the biggest challenge was to convey the group’s vision, and the expectations and commitment that come with that vision. Ever since the beginning, I have had very high hopes and ambition for the group because I believe we can achieve great things together.

So at the start, there was a wide array of interpretation on the group’s goal and there were major gaps in commitment. When that happens, it doesn’t come as a surprise that the operation of the choir gets affected. Discipline was unfortunately not very good.

The issue of attending rehearsals was our primary problem. There were 13 founding members of BFMC who live in and around London with full time shift jobs so that had limited our rehearsals to only once a week. With members not attending every rehearsal, the learning of music proved to be very slow and laborious. There was ever only one rehearsal that all members were present— it was the final rehearsal before the major full length concert!

As a musician, that is quite daunting even for a professional. Although most of the singers I had in the beginning loved to sing, most of them have not come across important points about vocal technique, choral discipline and musical terminologies.

How did you find such talented members to join the group?

Karlene:  Most of our members were recruited through word of mouth and referral to begin with. Now we announce auditions online and recruit through our social media pages. We have grown from 13 to 24 active members. Our members in the past and present have come from many different places like Norfolk, Berkshire, Surrey, Essex, Kent and around London to rehearse weekly in north London. Personally, I would like to think that it is the law of attraction working behind the scenes.

Most of the choir members work in the healthcare sector. Was this a coincidence or did you purposely sought Filipinos working in this area?

Having mostly nurses in the choir is pure coincidence. Many Filipinos in the UK work in the healthcare industry and the members usually tell others about us in their work place, or invite colleagues to our concerts. This is how we managed to attract potential new trainees who work as nurses, carers, or work in admin for the NHS. This is why we sometimes joke and say that Haraya rehearsal is the best place for one to have a medical emergency.

We are open to all passionate and committed singers of different backgrounds and careers. In our current member roster, we also have a librarian, an engineer, a voice-over professional, some who work in the food industry and an IT specialist.

Could you tell us more about Haraya’s performances and outreach work?

For such a young group, we have been quite busy and have performed in a variety of places. We usually do our season concerts and performances in London’s best churches and concert halls— including the world renowned performance venue— St. John’s Smith Square. We also took part as an opera chorus in a full production of Johann Strauss’ Die Fledermaus with professional opera singers and an orchestra at the oldest grand music hall in London— Wilton’s Music Hall.

The Philippine Embassy London has invited us in the past to perform for dignitaries and the diplomatic corps to celebrate the Philippine Independence at the Langham Hotel. Three years ago, we were featured performers at The Wonder Foundation’s Charity Ball at the exclusive Lansdowne Club.

We have done a couple of charity gigs to raise money for churches and good causes, participating in choral festivals and Christmas carolling in London, and in a concert in the Isle of Sheppey. As you can see, we have sung in many different occasions and events, and this shows the passion our members have on making music together. It is always a bonus when it is for a good cause!

One of the choir’s aims is to promote Filipino music. In what way is the choir able to do this?

We always include Filipino songs in our concerts. The Filipino community has been incredible in supporting us in attending our concerts, which is the reason why our performances are most usually sold out so we make sure that as a thank you, we do our best to feature Pinoy songs to give them a sense of home and nostalgia. The non-Filipino members of  our audience have also given us very good feedback on hearing and discovering something delightfully different, some wonderful songs and melodies from the Philippines.

We are very proud of the Filipino choral tradition which we utilise in our music-making. This includes the way we phrase a line, attack a note, and choose a vocal colour to convey musical thoughts and emotions. We make sure that we highlight our unique style and natural temperament in singing whilst still respecting the genre and performance practice of a certain song, whatever language they may be in.

Your ‘Heal the World’ video has been widely shared on social media. How are the members – who are mostly frontline workers themselves – coping at this difficult time?

It is quite remarkable and quite honestly unexpected how our HTW video has touched many people. We are very thankful to all who have shared the video and for those who haven’t seen it yet, please go and check it out on our media page. The members made a special effort to record individually, even after gruelling twelve hour shifts, as a way to help inspire others in these uncertain times, and remind people to stay at home and keep safe. It was also quite therapeutic for them to sing again. Music is scientifically proven to help soothe, heal and improve one’s mood.

At the moment, they are all working very hard and pressing on. One had a friend who passed because of Coronavirus. Another member had all of her family get the virus and thankfully have now all recovered. We also have a member who caught it, working on the frontlines but is also on the path to recovery. They are taking it a day at a time and making sure that all safety precautions are taken. And sometimes sing for leisure on their days off. We all catch up on zoom to check up on each other and cheer each other on at least once a month.

What’s in store for the group in the next coming months?

We have been invited to be featured artists in a fundraising effort for the World Wildlife Fund (WWF) and will hold an online concert programme on the 5th of June. If the situation improves in the next couple of months and it is safe for everyone to hold public gatherings again, we are hoping to hold a Valentine concert in February 2021.

We are also going to return as guests in the next Manchester Amateur Choral Competition in March, and as an extra treat, we hope to have a mini concert up in Manchester the day before our guesting. We have also been invited to join a Rodgers and Hammerstein marathon in the Isle of Sheppey in May. We hope to make more music, to continue to strive for music excellence, to learn more from other excellent performers and choirs by joining more festivals, to take part in more competitions, and to win more awards and prizes along the way and make the community very proud.