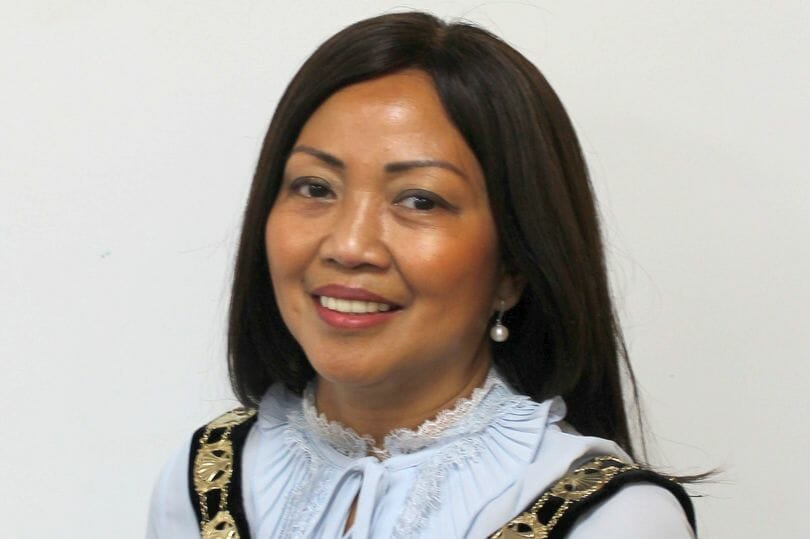 Herstmere Mayor Councillor Cynthia Alcantara Barker, the first Filipino woman mayor in England, recently died after a bout of serious illness. She was 58. Her death was announced by her brother, Gene Alcantara, on Facebook on 14 September.

Her family has arranged a viewing on 22 September from 9 am to 5 pm, at the Co-op Funeralcare, in Borehamwood. Due to coronavirus restrictions, those interested to attend the viewing are requested to RSVP Christine Barker at 07568574345.

Funeral services will be held on 23 September, 1 pm, at St. Teresa’s Church. Fr Antonio Pineda will preside. The Mayor’s Office will be represented by The Lord-Lieutenant of Hertfordshire, Mr Robert Voss CBE. Bishop Paul McAleenan, Auxiliary Bishop for Hertfordshire, will also attend to represent Cardinal Vincent Nichols, Archbishop of Westminster. The funeral services will be live streamed via this link: https://catholicparishesofborehamwood.org/live-streaming/

As First Citizen of the borough, Cllr Barker’s funeral hearse will make a tour of Hertsmere beginning at 10.30am in Borehamwood, travelling through Elstree, Bushey, Radlett, Shenley, South Mimms and Potters Bar, finishing back in Borehamwood at approximately 11.30am.

An online book of condolences has also been opened for her. Councillor Morris Bright, MBE and leader of Herstmere, wrote that “…she was one of the best public servants our Council has ever seen and one of the kindest, generous and caring of people that many of us ever knew.”

Councillor Barker was elected as mayor in June 2020. She was the first Philippine-born elected representative of the borough. She had been a borough councillor representing Borehamwood and Potters Bar since 2015.

Tinig UK offer their sincerest condolences to the bereaved family.