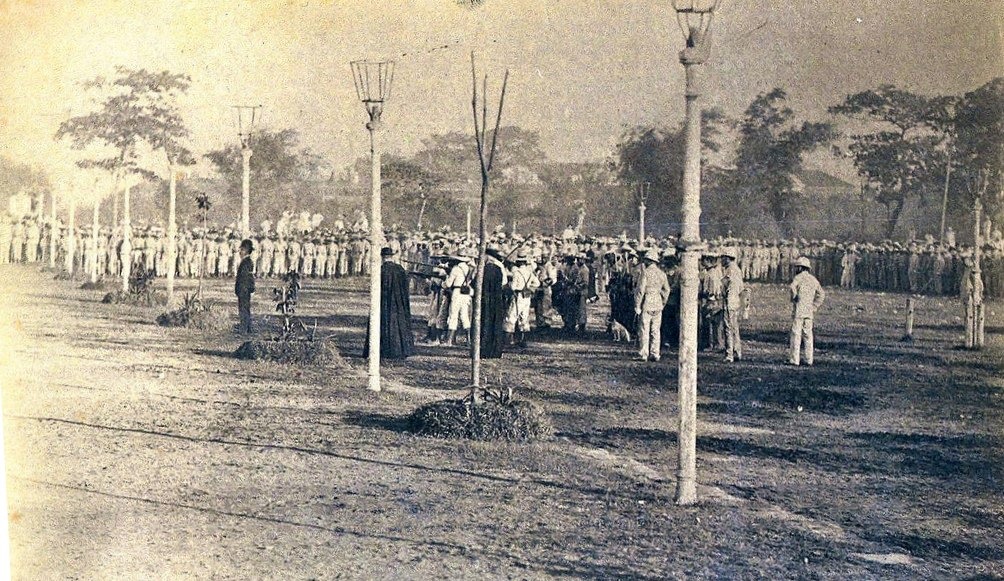 To commemorate Jose Rizal’s 124th death anniversary, we have invited Waray academic Dr George Borrinaga to share his article – originally published in the Journal of History – on how people from Samar and Leyte responded to Rizal’s death through their folk songs. This is a condensed version of the original paper.

New narratives about José Rizal (1861-1896) which appear around the time of his birth anniversary on the 19th of June and his death anniversary on the 30th of December often ponder on his significance to present-day Philippine society. Perhaps because of this recurring need for new perspectives on Rizal, we know little about how he was viewed by previous generations of Filipinos in relation to the important issues of their time.

We are largely unaware of how Rizal’s memory became a battleground of opposing meanings in the decades following his death by firing squad on December 30, 1896 for allegedly masterminding the Katipunan uprising which broke out in August 1896 and before the study of his life and works was (after fierce debate) institutionalized in the post-independence period through Republic Act No. 1425 or the Rizal Law of 1956.

Even less is known about the different ways in which Rizal was remembered by non-Tagalog speakers who came to identify as “Filipinos” after Rizal’s death but who did not have ready access both physically and linguistically to his predominantly Spanish-language writings, works that are said to have sparked anti-colonial “nationalism” among future Filipinos under Spanish rule.

It is in this light that I examine folk songs from the islands of Samar and Leyte that provide glimpses into the Cebuano- and Waray-speaking peoples’ sentiments about Rizal and what he stood for at the turn of the 20th century.

These songs show how Rizal’s death had a profound impact on communities that were part of the Spanish colony that came to constitute the Philippine nation but possessed their own cultural and linguistic identities prior to the Revolution and Rizal’s martyrdom.

Waray folk song which sees Rizal as catalyst of change

In our time, Rizal is often thought of as a liberal reformist who advocated for peaceful means in realizing social change. Despite doubts as to whether Rizal deserves to be remembered as the country’s “foremost national hero,” the writings of revolutionary figures such as Apolinario Mabini had pointed to Rizal’s death as a significant event that inspired participation in both the Philippine Revolution (1896-1898) and the Philippine-American War (1899-1902).

A key obstacle to understanding how people’s participation in the nationalist movement could be triggered by Rizal’s death is our temporal distance from that event which has attenuated the emotions that might have driven people to mobilize in response to it. However, oral literature and oral history give us access to narratives and sentiments about that time but these have largely been overlooked when considering Rizal’s influence on the Revolution.

In an article about the anti-American resistance in the town of Dolores in what is now the province of Eastern Samar, Fr. Robredillo documented a circa 1899 song in the Samar-Leyte Visayan or Waray language in which Rizal’s death is linked to revolutionary mobilization. The song’s lyrics, as remembered in old age by Benjamin Lazarra, a soldier-participant of both the republican and Pulahan (1902-1907) phases of the anti-colonial resistance in Samar, reads:

Noticia suceso acon sasabijon (Notice of events I will relate)

An pagempezar gud hadton revolucion (To really start off the revolution)

In the song, Rizal is portrayed as a victim of Spanish injustice whose death had to be avenged through participation in the Revolution. This latter course of action was regarded as a moral path towards establishing a nation that had undergone difficult experiences which could only be broken free from through collective action.

Socio-religious movements with older roots in the region such as that waged by the so-called Dios-Dios Movement in the 1880s (later known as the Pulahan Movement in the early 20th century) also re-emerged around this time and would continue the armed anti-colonial struggle until around 1907 following the surrender of the remaining republican forces in Samar and Leyte in 1902.

Various songs and poems from early-20th-century Eastern Visayas which reference Rizal in relation to these movements indicate that Rizal had served as an inspiration to people who pursued divergent or changing approaches in seeking independence.

Another source for local perspectives on Rizal’s martyrdom are the manuscript volumes kept at the National Library of the Philippines known as the Historical Data Papers, barrio and municipal historical and cultural profiles gathered by schoolteachers from 1952 to 1953 during the term of President Elpidio Quirino. The lyrics to a folk song in the Cebuano Visayan language documented in a barrio of Ormoc, Leyte, for example, goes as follows:

The song illustrates how Filipino unity was conceptualized through kinship terms. Rizal is regarded as a sibling whose death evoked strong emotions which compelled people to pursue what in the song is an unspecified course of action. Another notable characteristic of the song is how it distinguishes as two distinct groups a people represented by a wailing Filipinas (the Philippines) on the one hand and the jubilant Spaniards (katsila) over Rizal’s death on the other. This representation of the Philippines is congruent with other songs and poems from this period that portray the Philippines as a long-suffering “motherland” in need of liberation by its children.

In a long-time Spanish colony where the indigenous population were labelled as indios and in islands where people identified as both Bisaya and Cristianos by the late 19th century, this new identification of the Philippines as a “native land” (tuna kalugaringon) or “motherland” (iroy nga tuna) signified a shift of allegiance from “Mother Spain” (Madre España) towards the true mother which they shared with their “sibling” Rizal. For example, in the written poetry of the close friends Iluminado Lucente and Francisco V. Alvarado, well-known early 20th century playwrights from Palo, Leyte, Rizal is portrayed as a favorite child of the motherland who, through his ultimate sacrifice, became a trailblazer in his compatriot-siblings’ path to freedom.

Like family and village ties, the new relationship between fellow “Filipinos” or “Pilipinhon” (i.e., someone “of the Philippines”), the latter a Visayan term found in oral and written literature beginning in the first decade of the 20th century, was also to be based on reciprocity and “until-death” solidarity. The song thus talks about repaying Rizal’s sacrifice through “tears” (i.e., individual/collective sacrifice and suffering) in exchange for Rizal’s own martyrdom and his violent separation from his loved ones. Moreover, Visayan patriotic songs and documentary sources from the period highlight onong, or the risking of dangers with companions until death, as a key value in their pursuit of catalwasan (liberation/salvation) and caopayan (well-being), which would come as divinely ordained rewards for unified struggle.

Such localized meanings would subsequently be overshadowed by the “peaceful reformist” image ascribed to Rizal during the American colonial period when he was extolled as an exemplary model for young Filipino students. This posthumous portrayal of Rizal is reflective of the new values which he came to symbolize at a time when the Americans promoted Rizal’s memory to justify their colonisation of the Philippines as a fulfillment of Rizal’s education-centered vision for the nation. However, official forms of memorialization, such as the teaching of Rizal’s life and works in schools and the erecting of Rizal statues in public spaces, could also generate subversive meanings when it encountered local aspirations and ways of remembering Rizal. Take the following lyrics of a song in the Samar-Leyte Visayan/Waray language that was also documented in the Historical Data Papers project from a barrio in Guiuan, Samar:

Mentras nga buhi pa matindog ha plaza (As long as I am still alive, I will stand in the plaza)

Mentras nga buhi pa matindog ha plaza3 (As long as I am still alive, I will stand in the plaza)

The idea of a living Rizal took on figurative and even literal meanings for communities whose belief systems were heavily influenced by centuries of Christianization and Hispanization but which retained elements of the pre-Hispanic animist religion and the ancestor worship that was central to many societies both in the Visayas and the wider Southeast Asian region.

After the armed struggles for independence had been suppressed in Samar and Leyte by 1907, and whether through metaphorical or literal interpretations of a “living Rizal,” Rizal thus continued to symbolise local hopes of eventual freedom through the very same objects (e.g., statues, pictures of national heroes, etc.) and education system put in place by the Americans to promote continued colonial rule.

Waray/Cebuano songs of freedom in honour of Rizal

In representing Rizal as an esteemed son, sibling, and husband who was a fellow victim of colonial oppression, the above Visayan language songs about Rizal’s death are indicative of the different ways Rizal’s image and ideas were meaningfully adapted to express and appeal to the collective sense of indignation as well as the hopes and dreams of people from different ethnolinguistic localities in the Philippines.

Despite the subsequent dominance of official meanings which emerged during the period of American colonialism in the Philippines and later post-colonial Philippine governments, oral sources such as the songs I analysed point to localized forms of nationalism influenced by Rizal’s martyrdom which resisted colonial and centralizing meanings. These songs suggest that Rizal had also become an exemplar of local (i.e., family- and community-oriented) values and that his death by firing squad on 30 December 1896 had inspired the pursuit of village-centered aspirations of liberation and selfhood which, in many parts of the Philippines, continues to this day.

George Emmanuel R. Borrinaga, PhD, was born in Tacloban City and is assistant professor in history at the University of San Carlos in Cebu City. His research interests include local history, environmental history, community studies, and Leyte-Samar Studies. He is currently secretary of the Executive Council of the National Commission for Culture and the Arts’ National Committee on Historical Research (NCCA-NCHR). He completed his PhD in History at the University of Hull. This article is a condensed version of a paper titled “José Rizal in the Emotional Landscape of Samar and Leyte at the Turn of the 20th Century” which was published in the PNHS’s Journal of History [Vol. LXVI (January-December 2020): 213-278].