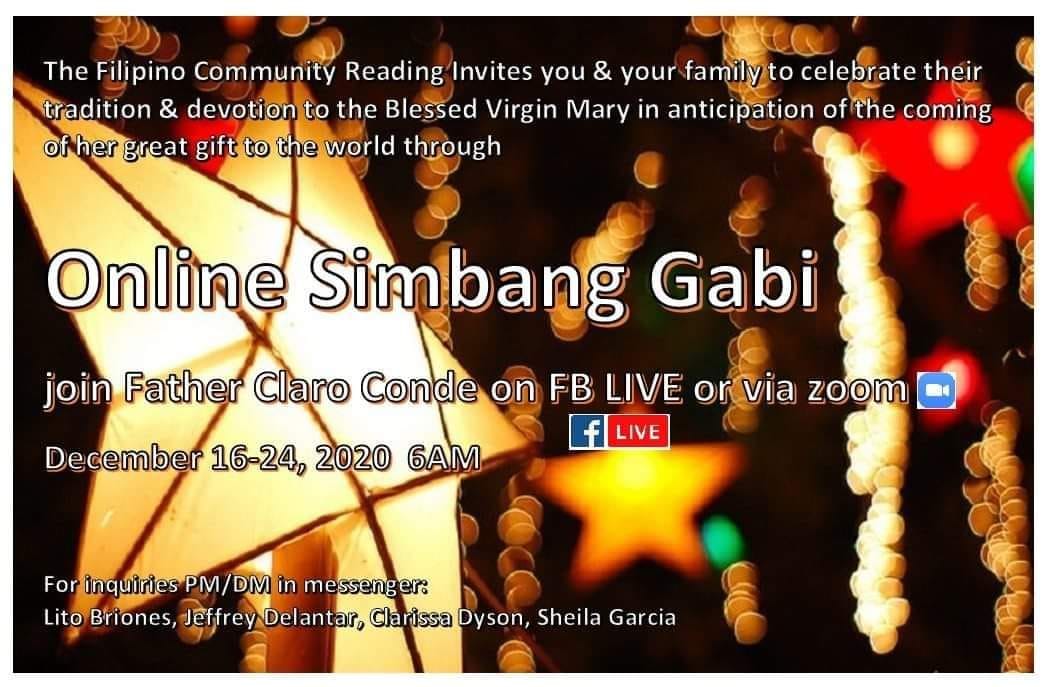 Simbang gabi (evening Mass), Misa de Aguinaldo, or dawn Mass – whichever way you call it – is an enduring Filipino Christmas tradition that we observe wherever we are in the world.

This December, we are having simbang gabi every morning at six o’clock at the Blessed Hugh Church in Faringdon, Oxfordshire. This is an opportunity to praise and thank God and our Blessed Lady for delivering us from the pandemic as Filipinos. The services will also be on Facebook and Zoom with choirs and readers from Reading. We will have Masses in different Filipino languages like Cebuano, Waray-Waray, Hiligaynon and possibly Ilocano.

My former confrere, Fr. Colm Meaney, gives a vivid description of simbang gabi. He is an Irish missionary who went to the Philippines as a student and spent most of his priestly life there. He describes Christmas in the Philippines in his piece on Reality Magazine this way:

“In the Philippines there is a tradition, going back to Spanish times, a novena of pre-dawn Masses from December 16-24, called Misa de Gallo or Aguinaldo Mass. The former phrase means ‘The Mass of the Rooster’ and is based on the tradition that a rooster crowed on the night of Jesus’ birth. It is also connected with the belief that the Mass should be over before cockcrow, so the Misa de Gallo usually starts at 4am, still pitch dark, and ends just as the first streaks of the dawn are showing in the pale sky. (Interestingly the word aguinaldo means a bonus or a gift, so al fits very nicely into the spirit of gift-giving). The Misa de Gallo attracts enormous crowds (it is not difficult to rise at such an early hour, considering the balmy, tropical climate).

After the Misa de Gallo, snacks are on sale in the church grounds. These are typical Filipino delicacies. For a drink you can choose between hot chocolate (cacao is plentiful) or hot ginger juice; the eats are mostly different types of rice-cakes.”

In the late 90’s, I initiated this Filipino tradition in the UK. Since we had it in the evening, we called it Simbang Gabi. At that time and even now, Filipinos find it hard to request their British parish priests to celebrate this service because the latter think it is un-liturgical. It is still Advent and we should be wearing violet not white garments and not sing the Gloria – Himaya sa Diyos. Even Filipino priests trained in Rome who are liturgical purists would not do the proper Simbang Gabi. For them, the Roman and Latin rites are the only way to worship God. They needed to go back and learn missiology and inculturation in the Philippines.

Last year, on 16 December 2019, the day before his 83rd birthday, Pope Francis celebrated the first ever Simbang Gabi at St. Peter’s square organised by the Filipino chaplaincy in Rome. This year, he presided Congolese Mass with the Africans. He is now on the way to approving the Amazon rite of Brazil, incorporating indigenous practice of worship the God of the Universe and Creation. Many elite traditionalist and conservative Catholics are not happy about this.

This year 2020, Pope Francis has given two Christmas gifts not only for Catholics but also to all Christians, peoples of all faiths and others who may not have faith but are concerned in the plight of humanity. One is his new book Let us Dream – the Path to better Future. In the COVID crisis, the beloved shepherd of over one billion Catholics has seen the cruelty and inequity of our society more vividly exposed than ever before. In his book, Pope Francis urges us not to let the pain be in vain. He encourages everyone to work together despite their differences to achieve justice and equity.

Another is his Encyclical Fratelli Tutti, subtitled “on fraternity and social friendship.” In the document, Francis states that the COVID-19 pandemic has proven to be the failure of the world to work together during this crisis. The encyclical calls for more human fraternity and solidarity, and a plea to reject wars. I hope you take time in reading them as your spiritual books together with the Bible.

The Las Casas Institute of the University of Oxford has invited me to participate in an online discussion about the encyclical with academics. The Philippines shares the historical, cultural and economic challenges of Argentina where Pope Francis comes from. I shared my experiences living with the poor in the mountains of Mindanao and the Visayas and the slums in Tondo in my younger years and since 1994, working with migrants, itinerant peoples and abused seafarers in the UK and other parts of the world.

The mystery of the Incarnation – God becoming Man in the Messiah – Jesus Christ deciding to be born as a poor child in the manger is what is Christmas all about. Jesus’ face is in the countenance of the poor. The poor in the first world are indeed the migrants, victims of human trafficking and modern-day slaves.

The words of Pope Francis inspire me and those who minister people living in the periphery of society.  The Pope speaks of resilience, generosity and creativity of so many people, the means to rescue our society,the  economy and our planet. I am reminded of Filipinos who sacrificed their lives as front liners all over the world, many of whom paid the ultimate price of love.

The Misa de Gallo /Christmas Masses and all the Facebook Livestream Masses we had since beginning of the Pandemic last March strengthen these positive traits of the Filipino to do what Advent requires – prayers, sacrifice and charity and the Spirit of Generous Love and Joy on Christmas Season.

Father Claro Conde is a Filipino priest who has been serving the Filipino community since 1994. He is the Team Leader of Ethnic Chaplaincies in the Diocese of Portsmouth, serving Filipinos, Chinese and East Timorese. Currently, he is the parish priest of Blessed Hugh Church in Faringdon, Oxfordshire.